These are real easy to knit ! I used the 3 ply Arctic musk ox blend in Navy, Raspberry, hand painted teal and navy and a new hand painted color consisting of all the above colours, 4 colours in total and i may have enough yarn for 2 pairs !
Knit on 2.75mm D.P.N so the construction is firm and close fitting.

The only patterns i could find were vintage style calling for a total of 7 needles.....way to complex and annoying so i thought i would design an easy pattern using only 4 needles and holding sts not in use with waste lengths of yarn. Much simpler, easy to work and No Tangled needles to make you scream ! Follow the tension suggestion below and if you feel that you need them larger or smaller simply go up or down a needle size: 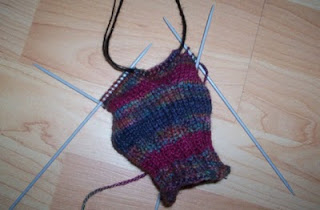 Tension on 2.75mm = 7 sts=1'' inch X 9 rows = 1'' inch
The picture above shows the thumb sts on waste yarn just before i close the gap.
***Remember when knitting in the RND (round)...Always put extra tension on your 1 st of every needle to prevent an ugly ladder/gap forming***. 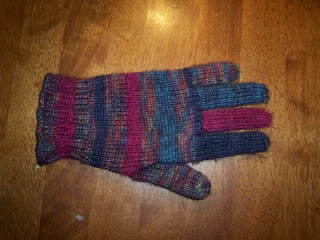 I will add the pattern and more pictures as i go along, i hope to be able to show different segments in detail so you can easily knit these for yourself !
I would say the only sticky bit of this pattern is separating the sts and holding the sts not in use and writing the text in a clear easy to understand manner !
If this is your 1 st pair of gloves its probably better to knit them using a single colored yarn and trying the gloves for fit as you go along.

The Pattern:
You will need 75 grams -3 skeins of Arctic musk ox 3 ply yarn. 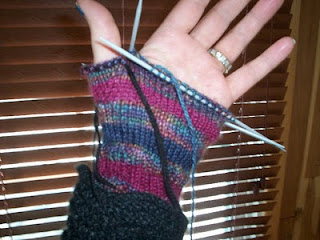 Next close the gap, knit putting EXTRA tension on the sts to close the gap. Palm Section:
Continue knitting around for another 5 rnds with navy and turquoise yarn.
As you can see from the picture above there is ample room to try the gloves on so you can get the best possible fit.
Change to hand painted yarn and knit another 6 rnds, again try the glove on for fit. After completing the next 6 rnds the work should reach the base of the beginning of your fingers.
Change to navy and knit 2 rnds.
, at same time inc 1 st each end of all 3 needles
Next make fingers:
With navy yarn, k across needle 1 and knit 8 sts onto needle 1 from needle 2. The rem 8 sts on needle 2, slip them onto needle 3 so you now have 48 sts on 2 needles that are parallel to each other.
DO NOT BREAK YARN !
See below 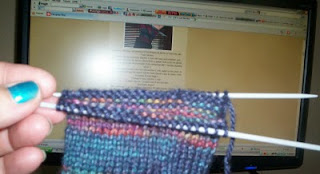 Take 2 lengths of waste yarn and remove 18 sts from the end of 1 needle so you have 6 sts remaining, repeat for other needle. At this point i like to change to bamboo needles for the fingers, the bamboo is non-slippy so there is no chance of dropping sts when working in the rnd on a few sts! 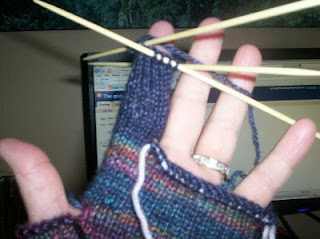 With Thumb gusset facing to the right side begin to knit the index finger. k 4sts onto needle 1, 4sts each onto needles 2 and 3, put extra tension on the 1st of each needle so its nicely closed. Knit about 15 rnds and try on the glove, the knitting should come just over the tip of index finger.
Next: Break yarn leaving a 10cm tail, load wool needle and run through the 12 sts, close tightly and sew in loose end to inside of glove.
Change color for middle finger or not !
begin cast on  by leaving a 10cm tail (this is used to sew gap between fingers when glove is complete). Rep as for index finger, picking up a total of 12 sts and knitting this finger to same length as index finger. Rep for the ring finger too.
Pinkie-small finger: You should have 11 or 12 sts remaining (me, sometimes i have 12 and sometimes i have 11) ! You should have 12, if not, inc 1 st by picking up a loop between finger gap. Knit as for other fingers trying the glove as you go along and knitting till it reaches the top of your wee finger and close in the same way as other fingers.
Next: turn glove inside out and sew in all the loose ends by weaving them into same coloured rows.(i prefer a really sharp darning needle for this as it slips into the pearl sts neatly.

Thumb:
divide the 13 sts onto 3 needles and inc 1 st on needle 1. Knit as for fingers trying on as you go and finish in the same way sewing in the loose end.
Go make another glove ! 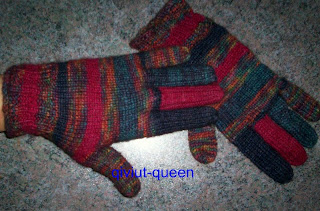 Posted by Unknown at 6:01 PM 2 comments: Links to this post 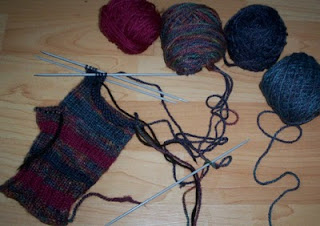 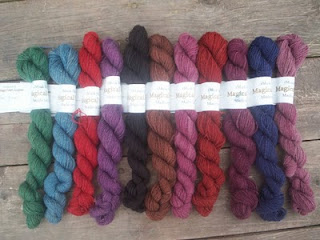 We LOVE Colour and want to know what is the most popular....Vote for your fav Arctic musk ox blend colour from the options above, left to right: hunter, slate blue, turkey red, purple, raven black, mahogany, raspberry ripple, Egytian red, Bordeaux, navy blue and Azalea.... Winner will be chosen at random and will receive enough yarn in your colour choice to make these EASY TO KNIT gloves.
This competeition runs to the 20th febuary 2011, open to knitters and Non-knitters world wide.
Posted by Unknown at 9:54 AM 33 comments: Links to this post

And the winner is : Alison H.
With her entry ......Aulavik, Arctic Lichen, Sitka, McKinley, Taiga. Alison please contact us so we can ship you your prize......
Alison wins the skein of 'Artists Hand yarn' and the gorgeous soft lace scarf......congratulations petal !

Thanks to all who took part. 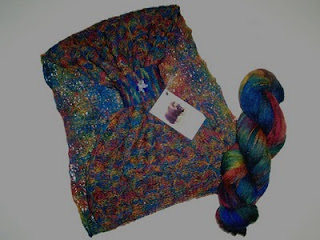 We have more Monthly competitions planned so Become a follower of our blog to see at a glance what were up to !
this months competition is already planned and will be published within a day or two.....so check back.....
'Happy Knitting New Year'
Posted by Unknown at 9:55 AM 2 comments: Links to this post 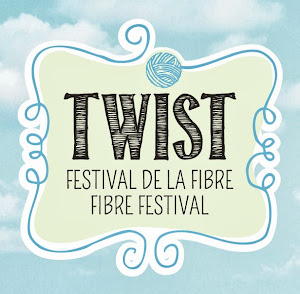